I've uploaded the final version of "Wargames of 1939" to Google Play at last. By the time I publish this post, the game should already be downloadable from there. Amazon Appstore will follow in nearby days as soon as the Amazon review process has approved the app.

If you like these kind of games, please rate "Wargames of 1939" on Google Play and/or share the app on Facebook and Twitter! Those things will help to get the game noticed and enable me to keep on creating more strategy games.

UPDATE 27.08.2013: Amazon Appstore has also approved the app now. Here are the [full version] and [free version] links to Amazon.

Here are a few screenshots of "Wargames of 1939" as promised a while earlier. The game is nearing its completion, but I estimate there is still at least a few weeks to go (I'm working on the game on my free time, which is quite a limited resource currently). Have a look at the images, you can click on the thumbnails to enlarge them to actual size! 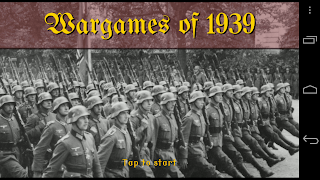 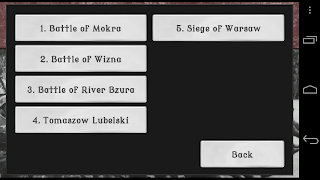 Current list of scenarios. There will be 3 more still  (Battle of Lodz, Battle of Kobryn and Battle of Kock, of which the last one will be released some time after the initial release) 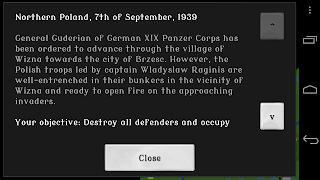 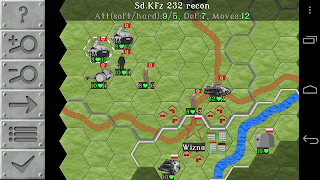 A typical map view from the game. Icons from top to bottom: 1) Help pages, 2) Zoom in , 3) Zoom out (zooming can be also done with pinch/expand gesture), 4) Go to next unit with movement points left, 5) Go to game menu, 6) End turn. 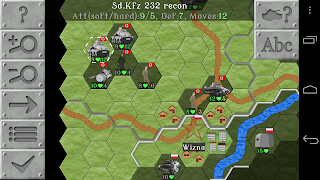 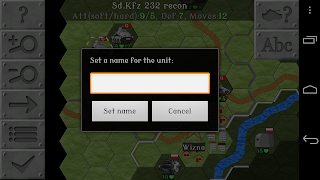 You can freely name your units or change existing names,
making them like Panzer III "Guderian". 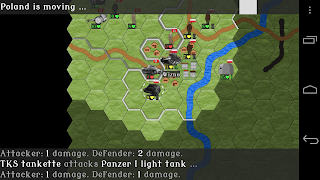 On AI turn, you get info about AI's attacks at the bottom of the screen. 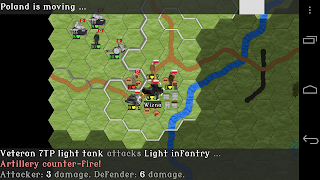 Hooray! Own artillery just defended a nearby infantry unit by firing at the AI's tank which was on the offensive. (Each artillery has one chance to fire on an attacker within range, during other player's turn.) 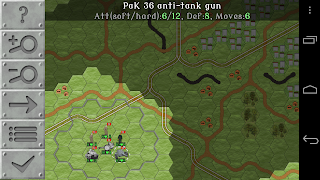 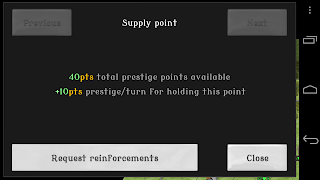 You get "prestige points" per turn for possessing supply points or victory points... 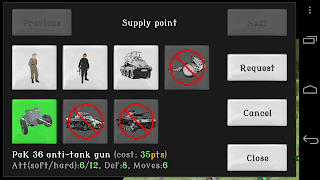 ... and if you possess a supply point, you can use prestige points for getting reinforcement units. 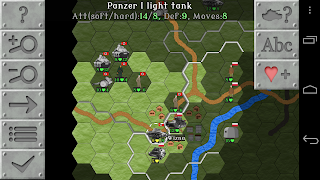 A unit that has been damaged can also be healed with those prestige points (see the "heart" icon at the right side), but ONLY if it has a safe route (area controlled by the player) between it and a supply point. 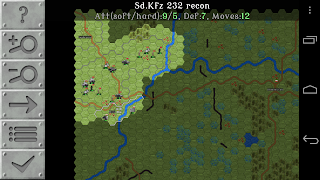 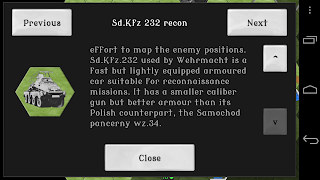 The help pages explain basic info about the units and how to play the game.

Hello, and welcome to my blog about the forthcoming turn-based strategy game for Android, called by the working title of "Wargames of 1939".

The game is based on the same game engine as in my two previously released games, Populus Romanus and Populus Romanus II: Britannia, but has some new tweaks to accommodate for the modern warfare (trenches, railroads, prestige points with which the player can request more troops from HQ, unit naming, etc).

I've been slowly but steadily developing the game since last year, and estimate to get it released on Google Play and Amazon Appstore likely somewhere during the summer vacations.

A few screenshots about the game will be posted some nearby weekend when I have the time to touch up the graphics to a more finished state. :-)

Meanwhile, have fun with the previous games:

(I have also a blog dedicated to the above games at: www.populusromanus.com)